Las Vegas, NV (August 06, 2020) – Police officers stated that two 16-year-old girls were killed when they were struck by a car in a DUI accident while they were crossing a street inside of a marked crosswalk in Las Vegas on Monday, August 3rd.

The accident took place at about 7:00 p.m. on Katie Avenue, between Maryland Parkway and Twain Avenue. Reports indicate that multiple vehicles were stopped, waiting for the stoplight at the intersection. 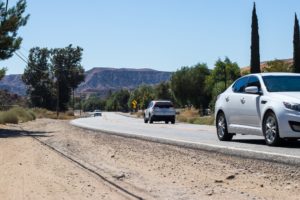 , both 16-year-old residents of Las Vegas. The coroner listed the cause of death for both girls as blunt force trauma.

Both fatalities have been ruled accidents, in this case meaning simply that they were not premeditated.

According to attending law enforcement officers, Ebone Whitaker, 38, was driving a car when it veered off the roadway at the intersection and then ran over the curb.

Her vehicle then crashed into a traffic sign that was posted on the sidewalk and continued going, striking the two teenagers who were in the crosswalk. Whitaker’s car continued traveling forward until it collided with a tree and the pole to a traffic light in the intersection’s southwest corner.

Two vehicles that were in the area were both struck by a tree that was felled as a result of the crash.

The driver was transported via ambulance to an area hospital with injuries that were listed as critical. Police say that, at this time, the driver was displaying obvious indications of impairment and an eyewitness to the incident described the woman as being “out of it.”

One of the girls was pronounced dead at the scene. The other was taken to Sunrise Hospital where she later died from her injuries.

Police reports state that a detective from the Las Vegas Metropolitan Police Department met with Whitaker, who had also been taken to Sunrise hospital following the incident.  She was read her Miranda rights and promptly confessed to drinking two beers and then consuming marijuana, heroin, crystal meth, and PCP before she got behind the wheel.

The report also goes on to mention that Whitaker has absolutely no memory of the fatal accident.

We would like to offer our deepest condolences to the family of the deceased victims, Ms. Nelly Amaya-Ramirez and Ms. Citiali Mora, at this time.

The loss of a loved one is always a distressing, heartbreaking experience but when someone you love was taken from you in an avoidable accident that was the result of the negligent or reckless actions of another driver, the devastation and emotional trauma cut much deeper. While their life may be over in an instant, your pain and suffering will not be.

The Nevada wrongful death attorneys at Richard Harris Law empathize with what you and your family are going through. Our firm’s case history includes a prolific number of wrongful death cases with successful outcomes favoring our clients.

Decades of collective experience have given us direct insight into the reasoning and acuity used by our legal system, meaning that our first-rate wrongful death attorneys can readily identify the steps you need to take in order to build an effective Nevada personal injury case.

We take an enormous amount of pride in our professional reliability and reputation, along with the immense amount of knowledge and skill we have developed that has empowered us to improve and evolve as personal injury attorneys.

If another person’s negligent or careless behavior was the cause of your loved one’s death, then we wholeheartedly suggest that you reach out to us and make an appointment with one of our dedicated wrongful death attorneys by giving our law offices a call at 702-444-4444.

Your first consultation with us will include a free assessment of your Nevada wrongful death claim. Once we are familiar with your case, we will be able to recommend the best legal path towards the positive outcome of your case.