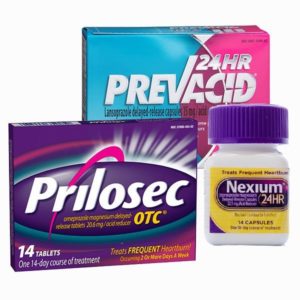 Some of the most commonly taken medications in the United States are treatments for acid reflux or heartburn and Gastroesophageal Reflux Disease (GERD). These include a class of drugs called Proton Pump Inhibitors (PPI). Nexium, Prilosec, and Prevacid are perhaps the best known PPIs and are available as both over-the-counter and prescription treatments.

Experts acknowledge that PPI use should be limited. Harvard Medical School Associate Professor and co-author of a study that linked PPI use to bone fracture, Dr. Andrew Chan M.D., says: “You really want to encourage patients to take the lowest effective dose that manages symptoms effectively, for the shortest possible duration.”

Prolonged use of PPI’s has been linked to several serious negative side effects ranging from bone fracture to dementia to kidney failure. It appears that the dangers are heightened by prolonged use of the drugs, and the Food and Drug Administration (FDA) has issued warnings about taking PPIs for longer than a year.

HEARTBURN OR ACID REFLUX AND GERD

Stomach acid is an important ingredient which allows the human body to digest food. Heartburn occurs when stomach acid backs up into the esophagus through the muscle valve where the esophagus and the stomach meet. This valve, called the Lower Esophageal Sphincter (LES), allows food to pass into the stomach and then closes.

In some cases, the valve doesn’t close completely, allowing stomach acid to move into the esophagus. This causes a burning sensation in your abdomen which can move into your chest or even throat. If this happens more than twice in a week, it is considered to be Gastroesophageal Reflux Disease, or GERD.

Acid Reflux can be caused by eating large meals, lying down after a meal, snacking at bedtime, eating spicy or fatty foods, smoking, obesity, drinking alcoholic or carbonated beverages, and pregnancy, among others. It can also be caused by hiatal hernia, a condition where the stomach and LES move above the diaphragm.

Some of the earliest treatments for acid reflux were antacids, such as Rolaids and TUMS, which contained calcium carbonate. These treatments did not affect the amount of acid produced by the stomach, but neutralized the acid in the stomach.

The next wave of treatments were called H2 receptor antagonists, or H2 blockers, such as Tagamet, Pepcid and Zantac. These medications actually reduced the amount of stomach acid produced by the lining of the stomach, which allowed the esophagus to heal from acid burns.

More recently, Proton Pump Inhibitors were introduced. PPIs alleviate symptoms of GERD and acid reflux by blocking the enzyme in the stomach wall responsible for the production of stomach acid. These medications include Nexium, Prilosec, and Prevacid.

PPIs have been available in the U.S. since 1996, and their use is so prevalent, side effects have manifested themselves over time. The manufacturers have generated billions of dollars in revenue from sales of medications which contain PPI’s. Nexium alone sold 18 million prescriptions in a one-year period from July 2013 to June 2014, generating $6.3 billion in revenue.

The widespread availability of PPIs, both as prescription strength and over-the-counter forms, has led to overuse. Negative side effects linked to PPIs can manifest when the medications are taken for longer than a year, taken more than once a day or both. Over the past several years the FDA and numerous medical journals have warned that overuse of PPI drugs can cause serious side effects ranging from muscle spasms, irregular heartbeat, bone fracture (particularly in women), and dementia, among several others.

This follows an April 2015 report from the Canadian Medical Journal, CMAJ Open, that warned that users of PPI drugs may be 2.5 times more likely of suffering acute interstitial nephritis, leading to inflammation and ultimately kidney failure.

As a result of the recent study results, patients are now filing lawsuits against PPI manufacturers for failure to warn of the serious side effects, especially of the kidney problems which have been linked to overuse of PPI drugs. It is thought that hundreds and maybe thousands of lawsuits may be coming.

The Richard Harris Law Firm is interested in evaluating whether you may have a claim. If you have taken Nexium, Prilosec, or Prevacid, or other PPI medication, for longer than a year, and have suffered kidney disease, call us today to discuss your potential case with our representatives at (702) 444-4444.

Use of proton pump inhibitors and risk of hip fracture in relation to dietary and lifestyle factors: a prospective cohort study

Association of Proton Pump Inhibitors With Risk of Dementia

Use of proton pump inhibitors and risk of hip fracture in relation to dietary and lifestyle factors: a prospective cohort study

The Purple Pill Problem: PPIs and Serious Side Effects