Las Vegas, NV – Four Killed Including Child, Dog in Fiery Wreck on I-15

Las Vegas, NV (August 13, 2020) – Two adults, a young child, and a family pet were killed during a fiery multi-car collision between an off-roading vehicle, a sedan, and a Ford pick-up truck that took place on the morning of Thursday, August 13th.

As stated by officers from the Nevada Highway Patrol, at approximately 11:15 a.m., a Ford pick-up truck that was pulling an off-road vehicle along the northbound lanes of Interstate 15 was on its way to the northbound exit ramp for Interstate 95 when a sedan also heading northbound along Interstate 15 attempted a dangerous lane change.

The failed lane change caused the sedan to strike a roadside crash attenuator before colliding with the Ford pick-up. The force of the high-speed impact then prompted both the vehicles to crash into the barrier wall on the righthand side of the interstate before both going over the side and becoming totally engulfed in flames.

Eyewitnesses to the atrocity informed police officers that the sedan was driving dangerously when the collision occurred, stating that the driver was weaving back and forth across the solid white lines just moments prior to impact.

The occupants of the pick-up truck, a man and his 4-year-old little girl, were still inside the truck as it dangled over the railing. The man was able to get out of the vehicle and successfully extricate his daughter moments before the truck went up in flames. Both the man and his daughter reportedly sustained only minor injuries, if any.

The truck then went over the railing, landing on top of the sedan, killing the driver. The off-roading vehicle became detached from the trailer and was hit by a passing pick-up truck on the interstate.

One of the vehicles struck a power pole at the scene of the accident, causing live wires to be exposed and creating an environment in which it was dangerous for emergency responders to attempt to reach any of the vehicles until the electricity was able to be turned off.

Emergency responders then had to disentangle the sedan which was fully pinned underneath of the Ford. Once they were finally able to separate the two vehicles, they discovered four bodies inside of the sedan. Officials said that two of the deceased occupants appeared to be adults, one was a child, and the fourth fatality was a dog that was also found inside the car.

An official from the Nevada Highway Patrol stated that the VIN number, the license plates, and everything else inside the car had been completely torched. As a result, the identities of the deceased victims are currently unknown.

We would like to offer our deepest condolences to the family of the deceased victims at this time. Our thoughts are with the injured victims and their families in hopes of a full recovery. 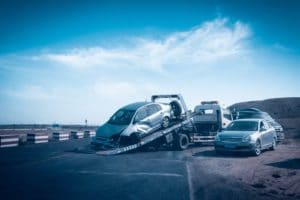 The loss of a loved one is always a distressing, heartbreaking experience but when someone you love was taken from you in an avoidable accident that was the result of the negligent or reckless actions of another driver, the devastation and emotional trauma cut much deeper. While their life may be over in an instant, your pain and suffering will not be.

The Nevada wrongful death attorneys at Richard Harris Law empathize with what you and your family are going through. Our firm’s case history includes a prolific number of wrongful death cases with successful outcomes favoring our clients.

Decades of collective experience have given us direct insight into the reasoning and acuity used by our legal system, meaning that our first-rate wrongful death attorneys can readily identify the steps you need to take in order to build an effective Nevada personal injury case.

We take an enormous amount of pride in our professional reliability and reputation, along with the immense amount of knowledge and skill we have developed that has empowered us to improve and evolve as personal injury attorneys.

If another person’s negligent or careless behavior was the cause of your loved one’s death, then we wholeheartedly suggest that you reach out to us and make an appointment with one of our dedicated wrongful death attorneys by giving our law offices a call at 702-444-4444.

Your first consultation with us will include a free assessment of your Nevada wrongful death claim. Once we are familiar with your case, we will be able to recommend the best legal path towards the positive outcome of your case.