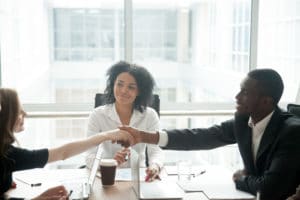 Your lawyer will let you know if they feel that use of Arbitration and Mediation may assist in bringing your dispute over a fair settlement to a conclusion in your favor. These two methods have been gaining greater traction over the last several years, and in some cases, they are required by the courts during the pre-trial phase. Since these methods are gaining in popularity, an understanding of why and under what circumstances they may be used to resolve disputes is probably in order.

Your dispute is, that you’ve been injured in an auto accident, you’ve completed your treatments, and been released from medical care, your lawyer has submitted a Demand to the Insurance Company which, for any number of reasons, has not resulted in a settlement. After negotiating with the insurance company, your lawyer has chosen to sue in order to obtain a fair settlement for you. In our last post, we discussed some of the preliminary activities included in the term litigation. Mediation and Arbitration are two of the alternate dispute resolution methods that we will look at next, so you can have some expectation of what these processes can accomplish and under what circumstances they are used.

Mediation and Arbitration are very similar since they are alternatives to a court trial and can avoid trial completely if a resolution is reached. In both methods, a neutral third party is selected to oversee the proceedings. This person should be familiar with this and similar types of disputes and acts informally as the judge in the proceeding.

The advantages of settling a dispute by an alternate method include confidentiality. If the negotiations fail, the discussions of the mediation or arbitration will not be used in an eventual lawsuit as opposed to testimony in a court which is considered public record.

These methods are less expensive than going to court and resolve faster. The parties to the dispute determine the resolution, not the judge or jury, by directly communicating face to face, rather than through a lawyer in a courtroom.

Both mediation and arbitration employ a third party to oversee the proceedings, and either method can be either binding or non-binding.

Mediation – is the less formal of the two methods. Usually a single mediator is employed who will attempt to help the two parties find common ground to settle the dispute. Under Mediation the mediator will not have the same powers as a court judge has but will facilitate discussion and attempt to help both parties settle. Typically, for our use, this less formal and non-binding form of dispute resolution is called Mediation.

Arbitration – may employ multiple Arbitrators, one of which is selected by each side, and the third selected by the existing Arbitrators. For our purposes, the term Arbitration will describe the more formal and more binding form of negotiation. In an arbitration, the findings of the arbitrator or panel of arbitrators, may be binding on both parties.

In both forms of conflict resolution, the facilitator(s) is chosen by the participants, while in a trial, you can neither choose the judge or the jury.

What to expect in a Mediation meeting?

A mediation meeting will probably take place in a conference room as determined by both side’s attorneys. A typical mediation session may be scheduled for either half a day or a full day. Mediation sessions provide confidentiality and discussions will not be used in a trial if negotiations fail. They cost less than a trial, resolution and settlement are faster,

The selected Mediator will take charge of the meeting and will explain rules and processes of the mediation. Both sides will be given an opportunity to make their statements and lay out facts which support that side’s position. You may be asked to speak at the session, at which time you should feel free to express yourself and the emotions you have dealt with due to the accident and the resultant dispute regarding settlement.

Once each side has made their initial statements, the mediator may ask questions of the two parties in order to gain greater insight into the details of the dispute. As the process unfolds, the Mediator may ask to have private meetings with the participants and will work to establish negotiations between the disputing parties.

If the mediation is successful, a written document may be drawn up for both parties to sign, which can be upheld in a court. The resolution, however, is accomplished by the disputing parties, not imposed by a judge or jury. It may take several mediation sessions to arrive at a full agreement between parties. If it becomes apparent that a resolution will not result from the sessions, both parties may agree to a binding arbitration, or court.

with the exception that the Arbitrator(s) have been given more power over the proceedings by the agreement to arbitrate, which will have been signed by both parties before the meeting begins. Binding arbitration means that the decisions of the arbitrator(s) are binding on both parties.

While this form of conflict resolution is more formal, it shares the advantage of having both parties to the dispute hammer out the resolution and settlement. It is less expensive than a trial and if successful will settle quicker. Depending on the complexity of the negotiations, it may take several sessions to arrive at a final agreement.

At the conclusion of the Arbitration Meeting(s) an Agreement will be drawn up to settle the case. You and the other party to the dispute will be required to accept the findings of the arbitrator(s) and settle on terms determined in the Arbitration.

Your lawyer will know when or whether alternate methods of resolution should or need to be employed to settle your case. These methods may or may not result in a settlement with which both parties feel comfortable. If these methods do not result in a settlement, the last resort is a civil trial before a judge and jury. We will cover that in our next installment. If you’ve been injured in an auto accident, through no fault of your own, call our firm to discuss your potential case at (702) 444-4444.