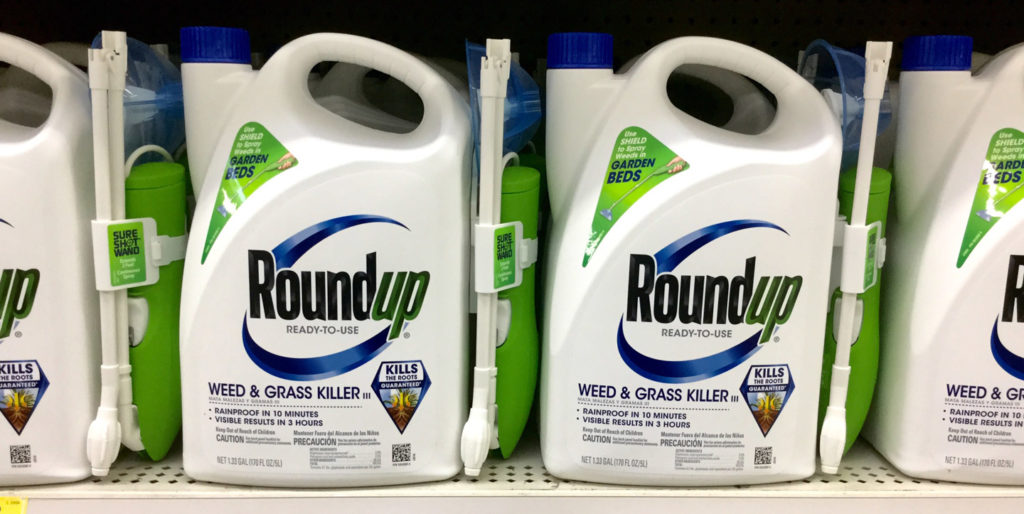 The most well known weed killer in the world, Roundup, with its active ingredient Glyphosate, has been determined, by the International Agency for Research on Cancer (IARC), an agency of the World Health Organization (WHO), to be a “probable human carcinogen.” If you have walked into any of the big box home improvement stores, especially in the summertime, you have seen pallets of Roundup near the door and in the gardening section. Even in small hardware and gardening stores, Roundup is ubiquitous.

Roundup is manufactured by Monsanto and generated $4.8 billion in revenue for the company in 2015, even though the patent for this product expired in 2000. Monsanto commercialized the use of glyphosate in the 1970’s, and the product has been in wide use for over 40 years.

Besides using Roundup to kill weeds around your yard, it is used on a mass scale to spray crops in the United States, and throughout the world. How is that possible since Roundup is a herbicide? Won’t it kill the crops? Well, yes it would, unless the crops were Genetically Modified Organisms (GMO) that is the crops had been genetically modified to be resistant to glyphosate. Monsanto also happens to be a supplier of GMO crop seeds of corn, soybeans, canola and cotton among others known as Roundup-Ready seeds.

Even without the genetic modification, however, plants do adapt and become more resistant to glyphosate over time, which requires increasing amounts of the substance to be applied in order to be effective. More than 85 million lbs. of glyphosate were applied to crops in the U.S. in 2001, which nearly doubled to 185 million lbs. by 2007.

What is the effect of this substance used on a mass scale, especially to those who must work with it? As of October 2016, there were over 30 cases working their way through the U.S. legal system, of workers who were exposed to Roundup on a regular basis, who have developed, Non Hodgkin’s Lymphoma (NHL). These cases have been consolidated into a Multi-District Litigation, as of October 2016, under MDL 2741, which will allow discovery for all federal cases to proceed under the direction of a single federal court. (see our article regarding MDL’s -https://richardharrislaw.com/2-defective-products-lawsuits-become-multi-district-litigation-mdl-cases/ )

At least one wrongful death case has been filed in California, Teri McCall v. Monsanto, Case No. 2:16:cv-01609 in the U.S. District Court in California’s Central District. In this case, the wife of Anthony McCall, a California farmer, is suing Monsanto after he died from NHL. He only used Roundup on his small farm because it was marketed as being “safe as table salt.” This case maintains that Monsanto has known about the dangerous side effects of glyphosate for decades but has misrepresented the product as being safe for humans and the environment.

California filed intent to list glyphosate as a carcinogen in 2015, based on the IARC finding, after which Monsanto sued to state to fight the classification in January 2016. Monsanto, for its part, denies that glyphosate is a carcinogen, maintaining that the IARC got it wrong. The case is still ongoing.

Several studies have been done over many years which link glyphosate with NHL:

2001 – A Canadian study, published in American Association of Cancer Research, found a relationship between glyphosate exposure and NHL

2003 – The National Institutes of Health library found higher incidence of NHL in 3,400 farmers in the U.S. Midwest who were exposed to glyphosate

The numbers of cases regarding Roundup are growing. If you have been exposed to Roundup or Glyphosate in an industrial situation, such as a farmer, groundskeeper, landscaper, or other agricultural role, and have developed Non Hodgkin’s Lymphoma, the Richard Harris Law Firm is interested in your case. Please call us today to discuss your situation with one of our representatives at (702) 444-4444.