Local authorities and paramedics responded to the scene of the crash that took place at the intersection of Valley View Boulevard and Russel Road at approximately 1:30 p.m. According to an accident report, a 32-year-old motorcyclist collided with a sport utility vehicle at the intersection for reasons still being investigated by authorities.

According to authorities, the SUV pulled out in front of the motorcyclist, causing the collision. The injured motorcyclist was riding on a Honda CBR 1000 RR headed north when he collided with a 2011 Ford Edge that was headed in the opposite direction at the intersection. The SUV reportedly was attempting to turn into an industrial complex parking lot at the time of the crash.

Paramedics assisted the injured motorcyclist at the accident site and he was transported to University Medical center for treatment of critical injuries. He remains in critical condition at this time.

No further information has been released regarding the circumstances of the crash at this time.

A police investigation into the details of the collision will continue. 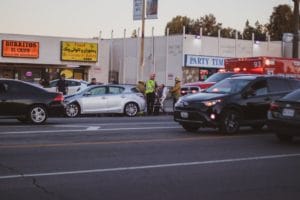 Motorcyclists are some of the most vulnerable travelers on Nevada roadways at any given time. On average, there are approximately 40 motorcyclist deaths that take place each year in Nevada. Nevada drivers are ranked as some of the most dangerous, accident-prone drivers in the United States. This could be partially due to the high negligence rate among their drivers involved in accidents. More than half of Nevada traffic accidents are caused by driver negligence. 42% of the traffic accidents that take place in Las Vegas, the largest city in Nevada, involve intoxication of some kind. If you are a driver in the state of Nevada, it is estimated that you will be involved in a traffic collision approximately once every eight years. You are about 21% more likely to be involved and injured in a car crash than the drivers in any other state.