Las Vegas, NV (July 19, 2020) – Law enforcement officials and paramedics responded to the scene of a traffic collision that took place at an intersection in Las Vegas yesterday afternoon.

The crash took place at the intersection of Farm Road and Tenaya Way at approximately 4:34 p.m. An unknown number of involved individuals were reportedly injured in the wreck. The identities of anyone involved in the crash have not been released at this time, and the nature of their injuries also remains under investigation by local authorities.

It is unclear whether or not anyone was transferred to the hospital from the accident site.

The intersection was blocked off for a period of time after the incident took place in order to allow police to investigate and paramedics to assist injured victims. The vehicles involved in the wreck sustained significant damages.

An investigation by the Metro Police Department is underway into the circumstances of the collision.

No other information has been currently released.

Our thoughts are with the injured victims. We hope for a full recovery. 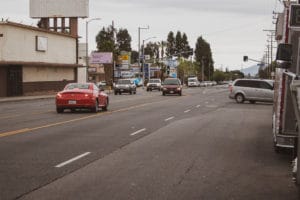 In Nevada’s largest city, Las Vegas, there are approximately 12,000 reported traffic collisions that take place per year. Of these accidents, close to half of them are caused by driver negligence. According to a recent statistical traffic report, 42% of Las Vegas traffic accidents are caused by intoxicated driving, which is one of the most severe and dangerous forms of driver negligence.

Nevada drivers are ranked as some of the most dangerous, accident-prone drivers in the United States. This could be partially due to the high intoxication rate amongst their drivers involved in accidents. If you are a driver in the state of Nevada, it is estimated that you will be involved in a traffic collision approximately once every 8 years. You are about 21% more likely to be involved and injured in a car crash than the drivers in any other state.