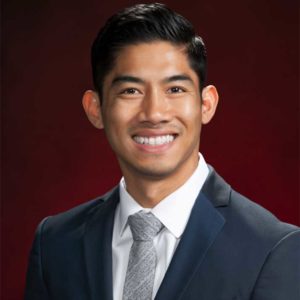 Gandhi once said, “Be the
change you wish to see in the
world.” Attorney Ian Estrada
took that quote to heart.

As a child, Ian watched a family member attempt to navigate the legal system after being injured in a car accident. Like most people, his family did not know what to do or where to turn. With so many variables (hospitals, insurance companies, legal options, etc.), the family was lost. Looking back, Ian does not know how he could have helped, but wished someone had. “Ultimately, I think my family member was treated unfairly by the insurance companies who knew she wasn’t the most sophisticated claimant. After I became a lawyer, I saw how common that story is, and I began looking into personal injury law.”

Born and raised in California, Ian attended the University of California, Los Angeles where he obtained degrees in Political Science and History in 2006. After graduating from UCLA, Ian went to Loyola Law School, Los Angeles, earning his Juris Doctorate in 2009. He relocated to Las Vegas and began his legal career at an insurance defense law firm where he represented insurance companies in personal injury lawsuits.”

Ian had a friend who gave him glowing reviews of the Richard Harris Law Firm culture. Armed with a passion to help those injured at no fault of their own, Ian joined the firm in 2017.

After spending years defending insurance companies, Ian’s first week as a personal injury lawyer stands out. “During my first week, I attended a mediation with a client. We were able to settle the case and my client gave me the longest hug. The next day she brought me lunch unannounced. It really showed me how much impact attorneys can have on people’s lives.”

Since joining the Richard Harris Law Firm, Ian has embraced the firm culture which attracted him to the firm, enjoying his colleagues and participating in firm events. Outside of the office, you can find Ian honing his photography skills and capturing the beauty of Nevada.