Las Vegas, NV (August 21, 2020) – A motorcycle accident turned fatal this past Wednesday evening at an intersection in Las Vegas.

Emergency medical personnel and police responded to the scene of the crash at the intersection of Nellis Boulevard and Washington Avenue at approximately 8:30 p.m. on August 19.

According to reports from the Las Vegas Metropolitan Police department, the incident involved three vehicles that collided at the intersection. A 2020 Kawasaki ZX6 was headed south on Nellis Boulevard approaching a traffic light when the crash took place. A 2004 Chevrolet Silverado was headed in the same direction traveling behind the Kawasaki, and a 2020 Nissan Rogue was traveling north.

The Nissan attempted to make a left-hand turn at the intersection and traveled into the path of the Kawasaki, causing the rider to be ejected from the bike. The Chevrolet then crashed into the Nissan.

Responding medical technicians pronounced the motorcyclist deceased at the scene of the wreck. The Nissan’s driver was transported by ambulance to Sunrise Hospital for the treatment of injuries of an unknown magnitude. There is no word on the Chevrolet driver’s condition at this time.

No one involved in the wreck has been identified at the present time as police continue their investigation into the circumstances of the crash.

No further information is available concerning the details of the incident. 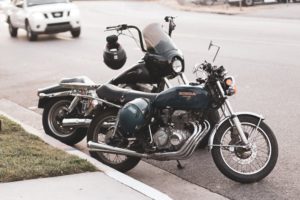 Motorcyclists are some of the most vulnerable travelers on Nevada roadways at any given time. On average, there are approximately 40 motorcyclist deaths that take place each year due to motorcycle crashes in Nevada. Nevada drivers are ranked as some of the most dangerous, accident-prone drivers in the United States. This could be partially due to the high negligence rate among their drivers involved in accidents. More than half of Nevada traffic accidents are caused by driver negligence. 42% of the traffic accidents that take place in Las Vegas, the largest city in Nevada, involve intoxication of some kind. If you are a driver in the state of Nevada, it is estimated that you will be involved in a traffic collision approximately once every eight years. You are about 21% more likely to be involved and injured in a car crash than the drivers in any other state.

In the event that you or a loved one have been injured in a Nevada traffic accident caused by the recklessness or negligence of another person, it is in your best interest to contact an experienced and skilled motorcycle accident attorney in Nevada. The reputable accident attorneys at Richard Harris Law Firm have been successfully preserving the rights of those injured in negligently caused car accidents for the past four decades. We strive to provide our clients with the maximum compensation available for their own personal injuries and losses. Recoverable losses in a car accident case with injuries include medical bills, pain and suffering, mental health treatment bills, prescription costs, funeral costs, and more.