The accident occurred on August 11 in the afternoon hours at the intersection of US-50 and East Nye Lane for reasons still under local law enforcement investigation. The cause of the crash has not yet been determined by investigators.

Paramedics were dispatched to the scene of the wreck in order to render aid to two people who sustained injuries during the collision. Their identities have not been disclosed at the present time, and the severity of their injuries also has not been released to the public.

However, it was reported that one of the injured parties required transportation by helicopter to a nearby hospital’s trauma ward, Renown Medical Center in Reno.

The intersection was closed while emergency responders evaluated, investigated, and rendered aid to those who were injured in the crash. The intersection has since been reopened by local authorities.

No further information has been disclosed at this time concerning the accident or its surrounding circumstances.

An investigation concerning the details of the wreck is currently underway. 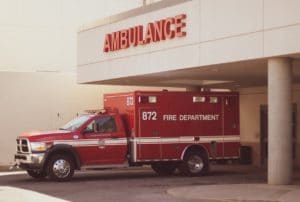 The drivers in Nevada are ranked as the nation’s most accident-prone and dangerous. This is probably due to the fact that more than half of Nevada traffic accidents are caused by driver negligence. A whopping 42% of the traffic accidents that take place in Las Vegas, the largest city in Nevada, involve intoxication of some kind. Being a Nevada driver means that statistically speaking, you are likely to be involved in a traffic collision approximately once every eight years. You are about 21% more likely to be involved and injured in a car crash than the drivers in any other state.