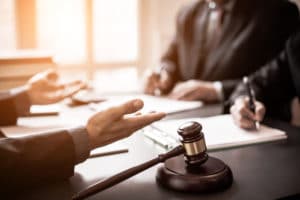 others in the workplace are harassing you?  Have you come back from a leave due to pregnancy or other medical condition and find that your job no longer exists?  Are you an hourly employee and your employer requires you to work longer hours but doesn’t pay you for the extra time worked?  Have you been fired, but your employer blocked your unemployment benefits?  These among many other concerns may be the basis for an employment lawsuit.

Nevada, California and Arizona are all considered “at will” states, which means that either employer or employee may terminate employment at any time with or without cause or notice.  However, state and federal laws provide for exceptions to the “at will” doctrine which are considered violations of public policy.  Furthermore, employers may not act contrary to what is stated in their employee handbook or other published policies and procedures.

Due to these and other concerns, employment law is a very complicated area of the law and requires an attorney to determine whether legal action can be taken.  We will investigate a few common topics of employment law in the next two blog articles, however, there are many concerns that you may have as an employee regarding your work conditions and treatment.  If you have a concern regarding an issue related to your employment that we don’t cover in this series, contact our firm to discuss your issue.

Discrimination in the Workplace

Discrimination in employment practices is complex, due to protections provided under state and federal laws.  It is a violation of public policy and is unlawful to hire, or refuse to hire, or to fire, or terminate an employee based on the following:

These issues may manifest themselves by asking improper questions in job interviews, not being hired for a job you are qualified for, being passed over for promotions and pay raises, or through demotions and pay reductions, or through wrongful terminations, harassment, and other factors.

The laws against discrimination are complex and proving each case presents its own set of challenges.  If you feel that you are, or have been discriminated against, due to the above factors, you should contact an attorney to determine your legal standing to pursue a case.

It is unlawful to terminate an employee based on the factors discussed in the previous section.  Proving that discrimination was the cause of termination is more difficult.  However, other factors for wrongful termination may also include:

Damages for a wrongful termination may include lost compensation and punitive damages.  You may even be able to regain your position if you wish.  A lawyer will be able to assess your probability of success after meeting with you and discussing your situation in a consultation.

Retaliation by an employer

It is unlawful for an employer to take retaliatory actions against you for participating in certain protected actions.  These include:

Retaliation may take the form of being disciplined or written up, being demoted or having pay decreased, not being promoted when qualified for a better position, substandard job reviews which don’t reflect real job performance, threats of any kind, or wrongful termination.

You may be entitled to compensation from your employer for such retaliatory activities, but again this is a complex area of the law, and you should contact an attorney to pursue legal action for retaliation.

Harassment based on the factors described in the Discrimination section are unlawful and when it creates a hostile work environment, may qualify for a lawsuit against an employer.  Common human behavior such as teasing and making fun due to things you may have said or done are not necessarily unlawful, but when it crosses into the territory of race, religion, age, disability, ethnicity or sexual orientation, it may be considered discrimination.  When such actions are reported to an employer and no action is taken to rectify the situation, you may have a case against the employer.

Sexual Harassment can occur anytime men and women spend time together.  There are many kinds of sexual harassment and harassers may be of either sex.  Sexual harassment is difficult to prove since harassers seldom admit to allegations made.  Sexual harassment may take the form of explicit jokes, inappropriate text messages, or unwanted touching.  When these activities become ubiquitous it may form the pattern of a hostile work environment.  Of particular concern is when a manager or authority figure implies, or makes promises of preferential treatment, or outright makes continued employment or promotion contingent on receiving sexual favors from employees.  These types of behavior should be reported immediately and may qualify for a lawsuit for sexual discrimination.

Discrimination, Wrongful Termination, Retaliation against an employee, and Harassment are violations of the law.  Employment law violations are complicated legal issues and are difficult to prove.  If you have been subject to the violations discussed in this article, you should talk to an attorney to determine if you have a case that can be successful under the complex legal structures resulting from both federal and state laws that govern the workplace.  In our next installment in this series we will cover the Family and Medical Leave Act, Independent Contractor issues, Wage and Hour Violations, and Unemployment Compensation appeals.  If you have been suffered an adverse action by an employer and believe you may have a legal issue, contact our office to discuss your potential case at (702) 444-4444.